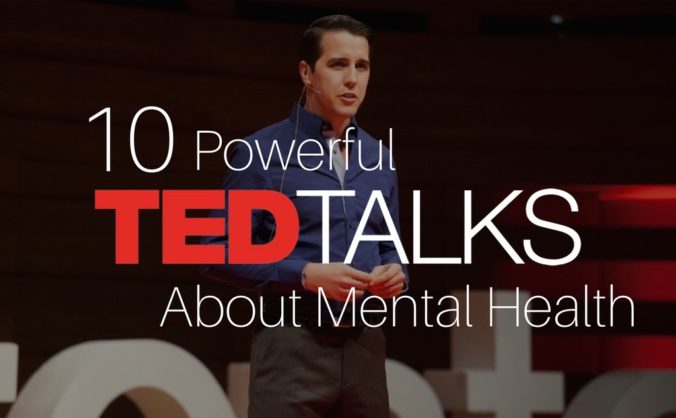 There are some truly inspiring TED Talks on the subject of Mental Health Issues out there – we’ve compiled a list for you here of some of the ones we find most inspirational (in no particular order). Please feel free to bookmark this page, take your time going through them and share them with friends! Education and awareness about the complexity of Mental Health Issues as well as knowledge of the breakthroughs in modern brain research are crucial for ending the stigma. Better care for those struggling with mental illness and substance use issues will only improve with a greater understanding of the subject.

When stress got to be too much for TED Fellow Sangu Delle, he had to confront his own deep prejudice: that men shouldn’t take care of their mental health. In a personal talk, Delle shares how he learned to handle anxiety in a society that’s uncomfortable with emotions. As he says: “Being honest about how we feel doesn’t make us weak — it makes us human.”

2) Why We Choose Suicide from Mark Henick

Listen and watch as Mark Henick broadens our perceptions on the subject of suicide. His TEDxTalk helps us to understand not only the point of someone who has made the decision to die by suicide, but also how we must re-frame our conversations around the subject in order to make change in the world.

Matè explores the power that addiction wields in his TED talk. In discussing the lengths of addiction— from drugs to power— from the lack of love to the desire to escape oneself, from susceptibility of the being to interior power, it’s clear that nothing escapes.

Maté is a specialist in terminal illnesses, chemical dependents, and HIV positive patients. Dr. Maté is a renowned author of books and columnist known for his knowledge about attention deficit disorder, stress, chronic illness and parental relations.

4) Mental Health For All By Involving All from Vikram Patel

Nearly 450 million people are affected by mental illness worldwide. In wealthy nations, just half receive appropriate care, but in developing countries, close to 90 percent go untreated because psychiatrists are in such short supply. Vikram Patel outlines a highly promising approach — training members of communities to give mental health interventions, empowering ordinary people to care for others.

5) What’s So Funny About Mental Illness? from Ruby Wax

Diseases of the body garner sympathy, says comedian Ruby Wax — except those of the brain. Why is that? With dazzling energy and humor, Wax, diagnosed a decade ago with clinical depression, urges us to put an end to the stigma of mental illness.

6) On Being Just Crazy Enough from Joshua Walters

At TED’s Full Spectrum Auditions, comedian Joshua Walters, who’s bipolar, walks the line between mental illness and mental “skillness.” In this funny, thought-provoking talk, he asks: What’s the right balance between medicating craziness away and riding the manic edge of creativity and drive?

Modern psychiatric drugs treat the chemistry of the whole brain, but neurobiologist David Anderson has a more nuanced view of how the brain functions. He shares new research that could lead to targeted psychiatric medications — that work better and avoid side effects. How’s he doing it? For a start, by making a bunch of fruit flies angry.

8) The Voices In My Head from Eleanor Longdon

To all appearances, Eleanor Longden was just like every other student, heading to college full of promise and without a care in the world. That was until the voices in her head started talking. Initially innocuous, these internal narrators became increasingly antagonistic and dictatorial, turning her life into a living nightmare. Diagnosed with schizophrenia, hospitalized, drugged, Longden was discarded by a system that didn’t know how to help her. Longden tells the moving tale of her years-long journey back to mental health, and makes the case that it was through learning to listen to her voices that she was able to survive.

9) The Bridge Between Suicide And Life from Kevin Briggs

For many years Sergeant Kevin Briggs had a dark, unusual, at times strangely rewarding job: He patrolled the southern end of San Francisco’s Golden Gate Bridge, a popular site for suicide attempts. In a sobering, deeply personal talk Briggs shares stories from those he’s spoken — and listened — to standing on the edge of life. He gives a powerful piece of advice to those with loved ones who might be contemplating suicide.

10) Toward A New Understanding Of Mental Health from Thomas Insel

Today, thanks to better early detection, there are 63% fewer deaths from heart disease than there were just a few decades ago. Thomas Insel, the director of the National Institute of Mental Health, wonders: Could we do the same for depression and schizophrenia? The first step in this new avenue of research, he says, is a crucial reframing: for us to stop thinking about “mental disorders” and start understanding them as “brain disorders.”

Eli’s Place Residential Treatment Centre will offer a range of recovery-based programs for adults 18 – 35 years of age who have serious mental illness, and who may also be struggling though issues of substance abuse.

The first of its kind in Canada, Eli’s Place will provide treatment within a therapeutic rural environment. There, participants will develop the skills to recover from illness, as they gain valuable life and work skills to help ensure a successful transition back to the community. As part of its multi-phase approach, Eli’s Place will also provide ongoing in-community support as needed.

Will You Join us in Building Eli’s Place?